Verizon Communications Inc. has agreed to pay $4.8 billion to acquire Yahoo Inc.,according to a person familiar with the matter, ending a drawn-out auction process for the beleaguered internet company.

The price tag, which includes Yahoo’s core internet business and some real estate, is a remarkable fall for the Silicon Valley web pioneer that once had a market capitalization of more than $125 billion at the height of the dot-com boom.

For New York-based Verizon, the deal simply adds another piece to the digital media and advertising business it is trying to build.

The deal is expected to be announced early Monday. The news was earlier reported by Recode and Bloomberg.

Verizon plans to keep the Yahoo brand, according to a person familiar with its plans. 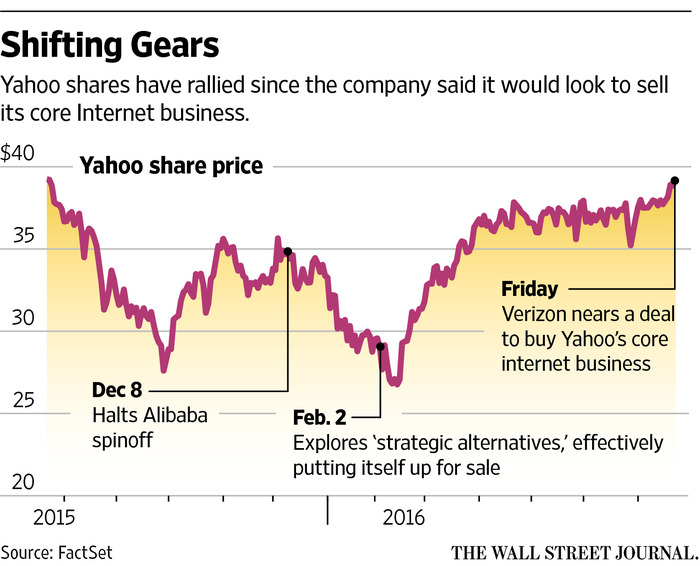 Yahoo’s chief executive, Marissa Mayer, is unlikely to have a prominent role—if any—under Verizon, people familiar with the matter said. She stands to make more than $50 million in compensation if she is terminated as a result of the sale, after earning over $100 million in cash and equity.

When the bidding began in April, Verizon was the immediate front-runner with a market capitalization of roughly $228 billion and a plan for how to plug Yahoo into its upstart digital media business, which includes AOL properties it acquired last year for $4.4 billion.

Verizon in June submitted a bid of $3 billion, but that didn’t include Yahoo’s real estate and came before last week’s final round of bidding.

Verizon is building a portfolio of online content and aiming to monetize it via advertising. Its current assets include Huffington Post and TechCrunch, which it acquired in last year’s AOL deal, and its own mobile video app, called go90. Acquiring Yahoo will bring in millions more viewers from Yahoo sites like Finance, Sports and News.

Verizon also hopes to plug data derived from smartphones into AOL, and now Yahoo’s, digital advertising systems, and it is aiming to build a competitor to online advertising giants Facebook Inc. and Alphabet Inc.’s Google.

But a combined Yahoo and AOL would be far outpaced by its now far-larger rivals.

Google and Facebook will account for more than half of the $69 billion U.S. digital ad market this year, according to estimates by data firm eMarketer. Yahoo’s share is expected to be 3.4%; Verizon properties including AOL hold an even-smaller 1.8% of the market, according to eMarketer.

“The headwinds for all large players not named Google and Facebook are very real,” said Pivotal Research analyst Brian Wieser.“Noticeable growth only has a chance to come with ongoing investment, whether M&A or internal.”

Last week, Yahoo said second-quarter revenue, minus commissions paid to partners for web traffic, fell 19%. This marked the sixth decline in the past seven periods and the steepest slump under Ms. Mayer.

The Sunnyvale, Calif., company also said display ad prices fell 15% year-over-year in the second quarter, while search ad prices fell 8%. During a conference call with analysts, executives said video ad prices were under pressure because of an influx of video ad supply and “uncertainty” around the Yahoo sale process.

“The pace of cost cutting is significant,” wrote Bernstein Research analyst Carlos Kirjnerin a July 19 note. “We suspect that there will be a price to be paid in the future for these fast, deep cuts, reflected in lower revenue growth.”

The Verizon deal is the first major step toward unwinding Yahoo. Next up is a trove of about 3,000 patents, which Yahoo is selling in a separate auction, that is expected to fetch more than $1 billion.

The patents date back to Yahoo’s initial public offering in 1996 and cover key areas such as e-commerce, online advertising and search, including its original search technology.

Yahoo also will need to figure out what to do with its stakes in Yahoo Japan Corp., majority-owned by SoftBank Group Corp., and Chinese e-commerce company Alibaba Group Holding Ltd., considered to make up the majority of Yahoo’s roughly $36 billion market value today.